Dana Perri-Where It All Began

Dana Perri has always been an athlete.  She got her start in swimming
and gymnastics when she was very young and found it was a great
outlet for physical expression. 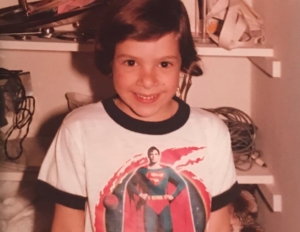 It kept her disciplined and focused
through difficult changes in her family dynamics, and helped her to gain
confidence in herself. A late bloomer, she was small for her age and
intellectually advanced to the degree she had a hard time fitting in with
her peers.  After her parents divorced, Dana switched to a performing
arts school to be with her sister and though she had been a gymnast she
was not a dancer or performer at that time and the change was
intimidating.  In school she was required to take electives and one of
those electives was a dance class, which was her first experience with
the performing arts. At first she felt uncoordinated and insecure. In fact
she was very mechanical in her movements.  Over time she made the
connection between gymnastic floor routines and dance and developed
her natural ability as a dancer while her connection to her first mentor
instilled in her a love of dance and performing.  She had her first
professional dancing gig at just 14 years old in Las Vegas dancing for
Obermeyer in a ski trade show.
Dana graduated from high school at 16, after skipping first grade and
starting a year early in elementary school. After graduating with honors,
she attended UC Irvine with a double major in dance and political
science.  Initially while attending college her intention was to graduate
and attend law school but as an artist she believed that dance was her
calling and made a commitment to pursue her dream in Los Angeles.  On
the audition circuit she was often working 3 or 4  jobs at a time trying to
make a break into the industry professionally.  She began working with
Cirque Du Soleil when she was 26. Being an aerialist and dancer were
her specialties and her skills were highly in demand.  During her time
with Cirque Du Soleil she was often in rehearsal for over 10 hours per
day and performing regularly, which was both physically and mentally
very demanding. This intense and focused lifestyle taught her that
anything was possible with hard work.  As she grew as a performer with
the company she developed a fearlessness that enabled her to branch
out and conquer other elements of the performing arts like
choreography and eventually led to becoming an entrepreneur in the
fitness industry.