Chicken Soup May Surprise You! 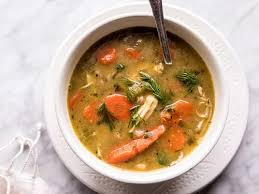 Chicken soup has long been considered a remedy for the common cold. Grandmothers have long been recommending chicken soup when you’re not feeling well. It turns out chicken soup does have cold-fighting capabilities.

Several studies over the years suggest chicken soup has a positive effect on the symptoms related to colds and flu. A hardy chicken soup tastes good and fills you up. It’s warm and makes you feel good. There are other benefits as well:

The health benefits from chicken soup come from homemade soup and not store bought soup. Canned soup is processed and high in sodium and preservatives.

A good chicken soup requires a chicken of about 3 pounds. Use both the white and dark meat for maximum flavor. The type of vegetables can vary but it usually includes celery, carrots, onions, parsley, garlic, scallions and dill.

A chicken soup doesn’t have to contain noodles but egg noodles are common. To most people, “chicken soup” and “chicken noodle soup” are two different things. The type of noodle is important. It can change the soup and its nutritional value.

Many recipes for chicken soup are available and its easy to make. Its no wonder chicken soup has been recommended for centuries, and is good for the soul!